In 2009, students from Ireland’s Institute Of Technology crammed 86 people into a single campervan. For many years, Iggy Pop squashed the genitals of a bull elephant into transparent plastic trousers intended for a 17-year-old girl. And tonight, in a similar feat of Herculean endeavour, Jason Pierce will attempt to fit Spiritualized – a band which generally comes surgically attached to a symphonic orchestra, several gospel choirs and the Royal Albert Hall – into the 100 Club, which is a bit like finding Vesuvius erupting in your airing cupboard. And then, as if that wasn’t historic and monumental enough, they’ll bung a flipping Paul Weller gig on top. A bit like stopping the Vesuvius in your airing cupboard from erupting by dropping Saturn on it.
‘They’, in this ridiculous scenario, are Converse, saviours of the 100 Club, who’ve had quite the nice little run of it over the past few days. Tomorrow, Blur will play here. A few days ago, it was Plan B. But tonight, all must make way this double-whammy of super-charged sonic kicks, Pierce’s epic gospel blues cataclysms slamming into Weller’s revitalised psychedelic punk soul.

As a warm-up for the musical equivalent of two Titans wrestling in a sack, the support acts attempt superhuman miracles of their own. Towns, spurred on by the unstoppable Stone Roses baggynaut, attempt to revive Madchester single-handed, despite clearly being from Weston-super-Mare. 2:54 drip their acid guitar gothics as if trying to coolly erode their way to the centre of the earth. And Vancouver’s garage punk duo Japandroids go for the world record for hammering out essentially the same song repeatedly for half-an-hour.

It takes barely 10 minutes for Jason Pierce to realise the folly of playing a club gig in support of a major mod legend. Having stripped Spiritualized down to its flame-spewing turbine core of guitars, bass, drums and just the two gospel singers, he attacks the gig with a stone-faced fury, unleashing the riot-punk bastard that always gnashed away between the orchestral ballast and blasting out new album opener ‘Hey Jane’ in a blitz of garage-blues scree. It’s a tune like a buried Prometheus space-ship taking off, but when it reaches the lull before the orgasmic crescendo coda of “Sweet heart, sweet light… love of my life”, it’s virtually inaudible. Beyond the rapt cluster front of stage, a bar-full of Wiggins-alike Weller disciples for whom Spiritualized might as well be Dumpy’s Rusty Nuts are talking over it. And, outrageously, they’re not even getting arrested.

The fragile chain-gang lament ‘Broken Heart’ suffers the same despicable fate and the dynamic build of a wondrous ‘Oh Baby’ – one of Pierce’s premium lullabies of pure elation – is destroyed by bar chatter. As a man whose usual onstage displays of outrage and emotion reflect the ferocity you’d usually find on something planted on Easter Island, Pierce is outwardly unflapped, but knows what he must do. With the closest he’s ever come to a snarl he launches into a 10-minute oxyacetylene take on Spacemen 3’s ‘Take Me To The Other Side’ full of deafening, squealing feedback that sears the skin off the dazzled mod faces like the end of Raiders Of The Lost Ark, sets fire to their sideburns, liquefies their spines, cracks open their skulls and spoons out and eats their jellified brains. Having proved himself among the greatest kick-ass rock’n’roll geniuses on the planet – and probably created a million Higgs-Bosons with a mere tap of his Cosmic Catastrophe pedal – Pierce gives a satisfied nod, a clap and leaves the stage. Job done.

You fear for Weller having to follow it, but the guy’s a legend on peak form and his revitalised, experimental new material is laser-targeted at punk clubs. You could argue it’s predictable, restrictive, even a bit tragic that a post-punk pioneer has to hark back to their inescapable initial flare in order to reclaim some relevance – an attitude Weller acknowledges by only playing ‘Start!’, ‘Art School’ and ‘In The City’ from his Jam days. But as he laces the punkish soul of ‘Fast Car/Slow Traffic’ and new single ‘The Attic’ with modernist psychedelics, weaves pastoral carnival electro into Beatledelic shapes on ‘When Your Garden’s Overgrown’ or gives The Who’s ‘I Can’t Explain’ a funk update on ‘That Dangerous Age’ it’s clear he’s given up meticulously recreating the classic soul sounds and begun inventing his own again. I mean, ‘Kling I Klang’ sounds like a Kraftwerk song that was left off the Mary Poppins soundtrack, and who’d have expected that from The Changing Man?# Like a scab you shouldn’t pick, though, even when cut to an hour Weller can’t help indulge in some tedious prog-soul work-outs during ‘Pieces Of A Dream’ and ‘Foot Of The Mountain’, plodding and pointless Riders On The Yawn wankathons that make the gig feel like being locked in sauna with Santana.  Still, they’re the only moments of the night that don’t strain the 100 Club’s seams to bursting. For the most part the Modfather struts and puffs through songs as youthful and vibrant as his new wave heyday, soaking up the chants of his name. It’s tough to imagine even the Pistols’ ’76 gigs scorching the walls as much as Weller does tonight. 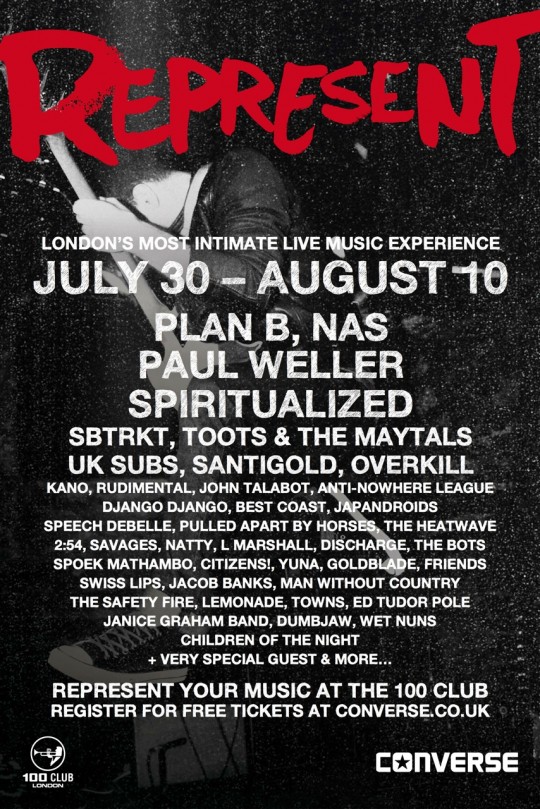 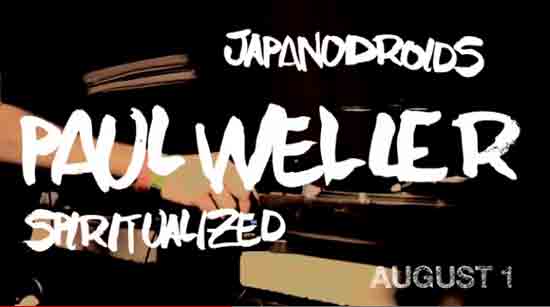